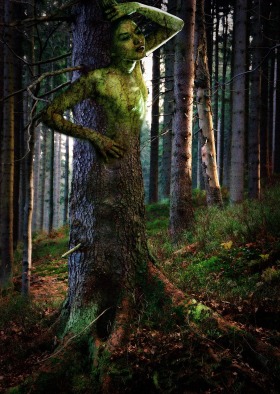 Back in July I posted on Facebook about the Nereid and Naiad who are demi-goddesses tied to water sources. Today, I would like to talk a bit about Dryads who, as the name insinuates, are tied to things on shore…trees specifically as a matter of fact.

In my current book, Twist of Fate, there are a few little known creatures that show up for what I consider a cameo, and the Dryad is one of them. They are minor and mortal goddesses that have extremely long life spans, tied to the tree that they are born with. The trees they are connected to are typically Oaks, however, they have been known to inhabit pine, ash and laurel as well. If the tree dies, the Dryad can as well, and Goddess help the mortal that causes that! Mortals are punished until the make peace with the Dryad, which could be a little tough if said Dryad turned into a pile of ash while lying at the base of their tree. Not that I am saying that happened in the case of my current book… but don’t be surprised if it does.

The Dryad that is most notable in my memory is Eurydice who fell in love with Orpheus after he played beautiful music for her. After being bitten by a poisonous snake while attempting to avoid the advances of another, Eurydice died and Orpheus mourned her death. He traveled to the Underworld, putting Cerebus to sleep with his music, in order to meet with Hades and convince him to allow her to return to earth. Hades agreed, but with conditions, because you know how he rolls. Orpheus could not look back until he and Eurydice both reached the upper world, otherwise, she would not be permitted to leave. Everything was going great until they reached the threshold of the living, and Orpheus had a moment of doubt that caused him to look back behind him. Eurydice, who had not yet stepped over the threshold, was tragically pulled back into the Underworld, and Orpheus was left alone with his music.

If you want to learn more about Dryads, this is a great site that has everything Mythology! https://mythology.net/greek/greek-creatures/dryad/