Okay, so he isn’t necessarily a creature. But since tonight is the night that he travels around the world bringing all good little boys and girls their Christmas wishes, I thought I would show Santa some love. Especially since I want to be sure he makes it to my house!

Origins of Santa Claus can be traced back to a monk, St. Nicholas of Myra, to around 280 A.D. who was known for his giving nature and kindness. The day of his death, December 6th was set aside as a feast day in his honor and is celebrated in many cultures to this day. This was believed to be a great day to make large purchases or get married, so for those of you who aren’t into Black Friday shopping, keep that in mind!

As the traditions continued, children put their shoes out overnight by the fireplace so that St. Nicholas could fill them with special fruits, candies, and treats. The stockings that we use in the US today are very reminiscent of that tradition, don’t you think? Children also left carrots by their shoes for St. Nicholas to feed his donkey, since he didn’t upgrade to flying reindeer until much later. The carrots may have been a better option since Santa didn’t get his belly until he moved to the US and started eating cookies. But I digress.

During the Protestant Reformation in the 1500s, praying to saints was believed to be against scripture, so Martin Luther and his follows introduced the idea that the “Kristkindl” (German for “Christ-child”) would come on Christmas Eve with presents for all good children. The name was modified to Kris Kringle in the 1840s and became a popular nickname in many countries for Santa Claus. It seems that the gift-giving elf wouldn’t let a little thing like a name change stop him, so he embraced his new identity and went on his merry way.

As traditions wound their way to Holland, St. Nicholas became Sinterklaas and continued to delight children with his gift-giving shenanigans. Major celebrations are held the night before St. Nicholas Day on the 5th which is when he makes all his deliveries to the households. You might even answer the door after a knock and find a whole sackful of them on the doorstep! By the 6th, his job is done, and he heads home for a night of well-deserved rest.

Sinterklaas made his way to the US through a celebration in his honor held by the Dutch families who had moved to New York. There are mentions of him as early as 1773. During his time here, his name evolved to Santa Claus and the gift-giving elf we picture today was born. In the 1800s the stores got in on the fun, and visits with Santa were offered for children. Multiple artist renderings helped with the image we now picture and the famous poem, written by an Episcopal minister Clement Clark Moore, “A Visit from St. Nicholas” (AKA ‘Twas the Night before Christmas), gave us the “jolly old elf” we know and love today. 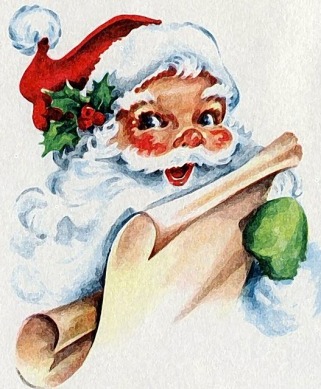 Whatever name he is known by, Santa Claus is a worldwide symbol of giving and joyous celebration. If it were up to me, we wouldn’t be saving that for once a year, I think we could all use a little Santa in our lives each and every day.

Happy Holidays however you celebrate and hope you’ve been good this year, you know he’s going to be checking that list twice no matter what name he goes by! XO

Some great posts I found when poking around if you want to learn more: