Harpies come to us from Greek Mythology and are a fantastical blend of woman and bird. The Gods often used them as punishers of the guilty, and the ladies took great delight in scooping people up and torturing them on the way to Hade’s domain. Their name means “snatcher” which is precisely what Zeus used them for when he wanted to cause havoc on earth. Sudden and mysterious disappearances were almost always blamed on the winged creatures.

They were classified as wind spirits, and it is in that context that I use them in my second book, Winds of Change, where they make a brief appearance. I intended them as protectors of the element and made it their duty to keep the realm safe from all those who intend harm. They are often described as ugly creatures with wings, terrifying and extremely ravenous. Birds with the face of a woman seem to be a popular depiction, however, for my purposes; I stuck with the image typically seen on Grecian pottery… that of gorgeous women with wings. In my upcoming book, Twist of Fate, Harpies are sultry and beautiful, or at least as beautiful as you can be with a feathered torso and razor-sharp teeth. 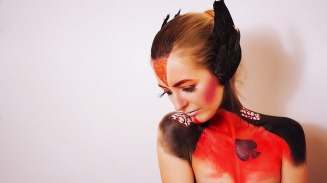 They are said to be the daughters of Thaumas (son of the Sea) and Electra (daughter of the ocean), which doesn’t go along with the whole air thing, but who am I to judge. I’m certainly not crossing Zeus, he might send these chicks after me! Anyway, the four Harpies that are most mentioned are Aello (“storm-wind”), Ocypete (“swift-flying”), Podarge (“fleet-of-foot”), and Celaeno (“the dark”), the last of which I use as a basis for my character, Cela, in Twist of Fate.

In Ovid’s story of King Phineus of Thrace, they appear as evil forces, so in this context the “hounds of Zeus” title they were known by makes sense. In this myth, Zeus gave the King the gift of prophecy, which he later used against the Gods. Zeus punished him by blinding him and banishing him on an island, where he sat before a buffet that was constantly under attack by the Harpies. Zeus had sent them there to steal his food, and it wasn’t until Jason and the Argonauts arrived that King Phineus was saved from his fate, and was able to eat a meal in peace.

For more on this fascinating creature, you can click the link below. For future Mythical Creature Monday posts, if you haven’t already done so, please follow me at any of the various links you can find here. And be sure to stay tuned for my upcoming release of Twist of Fate, where the Harpies are sexy, and the future fate of Wisteria takes a turn for the worse.

Have you used these lovelies in your writing? Make a comment below, would love to hear about it!

In the meantime, Happy Writing! XO