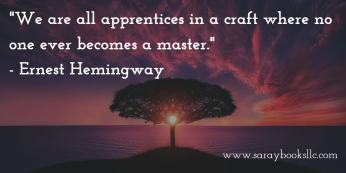 Three years of focus, of toil and pain,

Saw the birth of an idea that I had to see through,

Then the editor’s marks showed the path that was true,

I packaged it up, dressed in its finest clothes,

Sent it out to be part of the creative fold,

And the comments came next with their starred reviews,

Who weren’t fond of the story I told,

And critiqued the path I sought to choose.

At first I was hurt, crippled by the reject,

It was a stab in my heart that took months to heal,

But then I took a step back, saw my work as an object,

Which was when the value in the comments became real,

Wrote a few more stories, and now I see what they see,

A slower pace, a more fluid and lazy style,

And while I still want that for the series start,

I know now I can change it and still have it be,

A story that resonates with the reader for a while,

But ultimately remains true to my heart.

So this is an Ode to my two-star review,

You caused me to pull back and rethink my plan,

I’m a much stronger writer now, partly because of you,

Thanks for holding up a mirror when I took a stand,

My work will be all the stronger for it,

And I appreciate your honest words,

With gratitude, I accept the insight you are giving,

And I will keep your opinions in my mind as I sit,

Reworking the project started in the final half,

Of the life, I am lucky to still be living.

So excited to show off my beautiful new cover! Book 2 in the Goddesses In Love series launching September 2021! More info to come, and to check out the series you can link to Love For All Seasons in my Bio! #bookcoverreveal #comingsoon2021 #bookstagram #gdrwa #greekmythologyretelling #medusa gets a #HEA 🔮#fantasyromancebooks #paranormalromancebooks #indieromancebooks #2hourreads