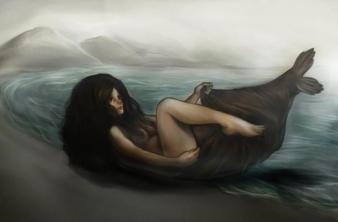 Selkies are mythical creatures that can be found primarily in Irish and Scottish folklore, although there are variations in other cultures with other types of animals. Selkies differ from mermaids in that their entire body morphs, not just their lower half, and they take the shape of a seal instead of part-fish. They can change into their human form by removing their seal skins entirely and if their skins are taken or misplaced, they must remain in their human form.

They are gentle creatures, more likely to dance in the moonlight than tempt a sailor to his death, which also differs from the Mermaid or even a Siren. In a well known Scottish tale “The Selkie Bride,” a fisherman falls in love with a Selkie and steals her skin, hiding it away and promising his love. Although they have several children the tale shows that the Selkie’s only true love is the sea, which always lures them back eventually.

Here is a link to the tale, hope you enjoy! http://www.weingartdesign.com/TMaS/Stories/tmas1-SelkieBride.html

Let me know if your Research has given you insight into the mysterious creature. Would love to hear from you!

Easiest place to find me is here: https://linktr.ee/DAHenneman