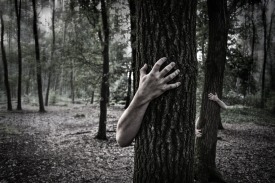 In my opinion, Zombies have gotten a bad rap over the last few decades. I mean, it isn’t their fault they were brought back to life by the Umbrella Corporation or infected with the “rage virus.” And while doing a little deeper digging (pardon the pun), it seems that practitioners of Vodou have been said to have the ability to do some re-animating of their own. At least that would be what Hollywood would have us believe. There are beliefs that tie Vodou with the creation of a Zombie, who will then have to respond to the will of the Bokor or sorcerer who brought them to life. While there are articles about the Vodou religion that contradict that notion, it does get the creative juices flowing from a writing standpoint.

Had some of these nasties in Book 3, and will be researching more for an upcoming project that won’t be too far off! In the meantime, cut the Zombies some slack… they need love too! If you haven’t seen it already, you have to check out Warm Bodies, it is Hollywood at its finest. We are talking Zombies meets Romance in the very best way! Happy Mythical Creatures Monday everyone, and let me know what you think about the movie! XO